happy monday to me

It's been tough finding the time and/or energy to keep up with this blog, but I'm still pretty active on twitter if you want to keep up with me. Here's a little update on whats been going on.


So my kids have gotten so big and so smart. It's still amazing to watch them learn and grown every day. They're not without their challenges and there's days I want to pull my hair out, but I wouldn't change it for the world.


Big news time:
I reserved my ticket for CAPCON 2017! I'm so excited to join the community for what will end up being a weekend of very interesting experiences. I've read a bunch of posts and recaps of years past, but I'm still not sure what to expect. I'm thankful that a good AB friend of mine is willing to share a room with me and show me the ropes. Should be interesting.


I had a rather scary and expensive morning so far. On my way to work I all of a sudden felt what I thought was my front tire bursting, followed by a grinding as I drove in bumper to bumper traffic. Thankfully I was able to quickly pull to the side of the highway and inspect the damage. To my surprise there was no damage to my tire or rim which left me puzzled.

I could barely make out any damage in the darkness of early morning, even aided by my cell phone light. (can you even call the thing on my pocket a phone anymore?) I got back in my car and texted my wife, who was still sleeping as it was 5:45 in the morning. "Something broke on my car" was all I wrote, I didn't know else to say. I really didn't have any more information to share.

We had a brief conversation about how to get a tow truck through our chosen armed services financial institution, and hung up. A police car pulled as we hung up and I reiterated my confusion and lack of information with "Something broke on my car." He seemed puzzled and took a look himself. After driving forward a couple feet he determined my brake pad had exploded and said he would help me off the highway to a gas station.

After parking and looking again, his description seemed correct, so I found a garage next to the nearest train station so I could still get to work. The grinding stopped after I felt and heard some more metallic stuff break off my wheel. I'm not sure if this was good or bad, but for some reason I felt better about driving it and considered driving into work and dealing with it later. My wife advised against it and I pulled into the mechanic's parking lot. I snapped the following picture and felt considerable worse about my situation. 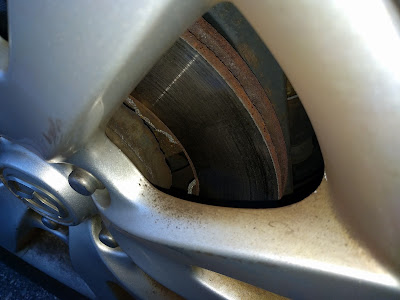 That would be the head, I believe they called it, completely free from the rest of the rotor. I had to wait almost an hour for the mechanic to open, but when he finally looked at it, he was rather surprised. Apparently this is very rare, especially since they determined it was caused by heat and stress, and not a physical object.

I left it with them and caught a train to work. I was only 90 minutes late, but I was supposed to be teching a show this morning so my director had to cover. Not terrible, but lost hours means lost money. And lost hours due to a problem costing lots of money is an issue.

The not so fun part came later when the mechanic called and of course tried to sell me on a ton of stuff I didn't need, and couldn't afford. He said there was some visible stress fractures on the other front rotor and suggested at least replacing both along with my nearly dead pads. I agreed and should have a fixed car by the time I leave work.