Today is my sisters boyfriend's birthday. We work up around the normal 730 am to the lovely cries of my youngest wanting to be let out of her crib. She's smart enough and agile enough to climb out herself, but we put her in a sleeping bag at night to keep her warm. She likes to roll around and throw the blankets off so she used to wake up freezing during the winter.

My wife spent a good amount of time today doing homework while I brought the kids outside to play. My oldest was sad that there was no more snow, but she tried sledding down the backyard anyway. Obviously she didn't get very far, but it gave me a good workout pushing her down the grassy hill, and pulling her back up again to keep the dream alive.

I feel like I checked the time about a hundred times hoping it was time bronco to my sister's boyfriend's birthday party. We were meeting my parents and my sister and her boyfriend at a local sports bar/fun center for dinner before we would part she in the "fun center" portion of location. This place is pretty sweet actually. Good food and a bunch of arcade games, along with a small big ball bowling alley in the back. The best part of this situation is that my mother-in-law (MiL) offered to take the kids home after dinner so my wife and I could enjoy ourselves.

Dinner was hectic, but you kind of expect that when you're eating with 2 toddlers. After dinner we showed the kids the games and let my oldest push a bunch of buttons. She was excited but had no idea what she was really doing, or have any idea she was winning. She probably doesn't even understand what winning is yet. Anyway, she pushed a bunch of buttons and some tickets came out, but she was on to the next game before even registering tickets were dispensed.

Eventually we had to be the mean parents and put the kids in a car to go home while we got to stay and play. My youngest was just happy to be sitting and sucking her thumb. My oldest was very unhappy about the situation, but parents need breaks sometimes.

After the kids left we bowled a couple games with 5 other people, and about 8 spectators. It was a busy lane. I won the bowling overall, but that's not surprising since I basically free up in my grandfather's bowling alley. My whole family is pretty good; my mom was even in a tournament on tv.

After the bowling the real action happened. The 6 of us who were left started playing the arcade games. I watched as my sister and her boyfriend played Jurassic Park for probably 10 minutes, or maybe I should describe the time elapsed by how much money was spent. My sister and her boyfriend played Jurassic Park for about $20. We later moved on to games you can win tickets from. Or, as I like to call them, games you can win imaginary currency from that you won't end up spending on anything interesting, if at all. One of our first big wins of the night was Deal or No Deal. My sister and I doubled up at the beginning and walked away with the winning case, and a cool 400 tickets! 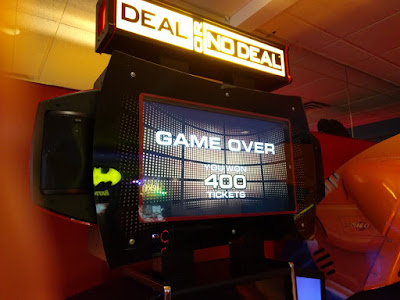 That was my pick from the start, my sister was a little hesitant, but I held strong. After that amazing win, my sister's boyfriend and his friends cleaned up the jackpots from 4 other games before we finally called it quits around 12:30 am.

Our ingenious plan was to have my mother-in-law take our kids home in my car, and we would get a ride home with my sister and her boyfriend. We figured we could drink as much as we wanted and didn't have to worry about driving home. Well, we were both about done with being there by 11pm, and my wife didn't end up drinking because she wasn't feeling too well. So we stayed out way longer than we wanted to for basically no reason. Oh well, live and learn, then get Luvs.
Posted by DL Dex No comments:
Email ThisBlogThis!Share to TwitterShare to FacebookShare to Pinterest

No padding is sexy now

Thankfully it's Friday. I went in super early this morning and got out at 1pm. I ended up meeting my wife, kids and mother-in-law (MiL) at a Japanese restaurant near the local mall. This would have been a great time for a late lunch, but I had already eaten at work before I left. I work in a hotel in Boston so I get free food every day. I wouldn't pass up the amazing chicken parmesan they make.

The restaurant we went to was one of those hot pot restaurants where you order a large bowl of broth and a bunch of raw ingredients. You then cook the ingredients in the broth on a stove top burner in the center of your table. It makes this amazing soup/stew concoction that always tastes amazing.

Anyway, after lunch we spent a few hours walking around the mall. My wife needed some new clothes, my kids needed new shoes, and we wanted to get ideas for my oldest's 3rd birthday in a month. Speaking of my oldest daughter, she is adorable, and very smart. She also can navigate an escalator without hesitation or help. She doesn't, however, quite understand that escalators only go in one direction. Well, she might understand now after I spent what felt like 5 minutes explaining it to her at the mall.

See, the down escalator was broken, insert Mitch Hedberg joke here, so after we rode the escalator up to the second floor, my daughter decided she had to go back and see her mommy immediately. Since she didn't quite grasp the idea that an escalator was a bit different than a regular set of stairs, she proceeded to turn right around and try to go down the up side. I had to drag her away kicking and screaming as she tripped trying to get her feet on the moving stairs. It took a few minutes of explaining, but she finally agreed to go with me to find a working down escalator or elevator. Some day later I'll tell her about adolescent daddy who used to run up and down the opposite side of the mall escalator with his friends. Best not mention it now.

We eventually found my wife and MiL and found our way to Victoria's Secret where I saw this new promo in the store window. I can't say it's not correct, but hey padding is definitely sexy! 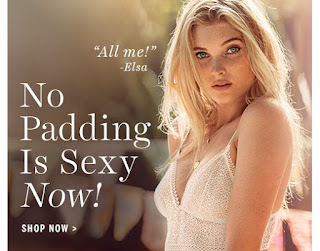 After leaving the mall, our afternoon was fairly uneventful and there was no talk of last night's events. My MiL did mention that she has my birthday present to give to me early because she won't be around for my actual birthday. So that should be pretty good. She's a good present giver.
Posted by DL Dex No comments:
Email ThisBlogThis!Share to TwitterShare to FacebookShare to Pinterest

I was up and out of the house real early today. After an 11 hour day, I got home around 8. My wife called me soon after, having just left class, suggesting that we go out when she got home. I had to decline because I needed to get up at 4am the next morning. At this point, my alarm would be going off in about 7.5 hours.

I took a seat on the couch to watch a bit of the Red Sox with my dad and mother-in-law (MiL). My wife got home soon after and I knew something was wrong. She was dressed pretty nice. It's not that her dressing nice is wrong, far from it, it was that she had dressed nice to go out with me. I only turned her down because I had to be at work at 6am. So she quickly went upstairs to change and my MiL came over to me on the couch.

"You should go see your wife, she went up stairs crying because if you. She said.

"Holy shit." I mouthed to myself. She was doing her typical butting in the middle of things that aren't her business.

I hate when she does this.

My wife was already changed when I got upstairs. I apologized for not being able to go out tonight and she seemed ok with the sitiation, albeit still sad. I went to bed after and started to wonder just how long I had to put up with this.
Posted by DL Dex No comments:
Email ThisBlogThis!Share to TwitterShare to FacebookShare to Pinterest
Newer Posts Older Posts Home
Subscribe to: Posts (Atom)