a night with the wife

So I wanted to write a quick update about what happened Thursday night, don't worry everyone it was all good. To be honest I was craving a diaper all day. I decided not one wear one last night because I don't want to overdo the whole diaper thing. Don't get me wrong, I would love to diaper up every day when I get home from work but I don't want my wife to get sick of seeing me in a diaper. I don't want her to come home one day and be like "you wearing a diaper again?" Thus ruining any future diaper wearing around her. For this reason I chose my diaper wearing sessions carefully. So onto last night.

When my wife got home, about an hour after me, she suggested we go out to eat. My first thought was "great because I'm hungry", my second thought was "I'm so glad I didn't diaper up because I would have to take it off after just an hour". After a brief debate we decided on Piccadilly Pub, which is a great place to eat if you’re in or around Massachusetts. We had a couple tall beers at dinner and stopped for more beer and wine on the way home.

When we got home we opened a couple more beers and sat down in the living room. I wasn’t paying attention when my wife opened her laptop but he next question peeked my interest to say the least.

“So, do you go on this website?” She asked. I quickly spun my head around to see she had googled ‘diaper fetish’ and was clicking on the link to dailydiapers.com.

“Yup.” I replied and a big smile came over my face.

“There’s anime this site?” She said, confused. She scrolled to the bottom to see the two diapered characters then clicked over to the picture galleries. I proceeded to explain the pasties and drawings and the 19000+ free pictures but she didn’t click on any folders to actually see the pictures. She instead clicked back to the homepage and then onto the dating website where she found the “hot or not” section and went through a bunch of those. Unfortunately for us both, they were mainly pictures or old men.

She then went back to the search page and clicked on diaperspace.com. “Are you on this one too?” She asked.

“You know what, I have an idea. I know what to draw on your diaper next. Go get me a pen.”

She was excited about it and I was excited to get out of the room. I had nothing to hide but I so far she has seen me in a diaper but she hasn’t seen my online presence. While I was searching for a marker in the office she called out to me.

“Umm, yeah, I told you that. I like blogging and stuff.” It dawned on me that I may have never told her about this very blog…oops.

When I got back to the living room she asked if she could read it. “Of course, go right head.” I read every word as she did expecting for some comments but she didn’t say much. She did playfully poke fun at me for various aspects of my short story I posted. It was all in good fun though.

We she was finished reading every post I made she told me to turn over so she could draw on my diaper. I gladly turned over and she jumped on the back of my knees and started drawing. When she was done it happened to be way past my bedtime. After talking about how much it sucked because we both wanted to stay up longer she decided to start drawing on the front of my diaper as well. The night ended shortly after and I know that it will be just as hard to throw this diaper out as it was to throw out the last one she drew on.

But I will always have the pictures. 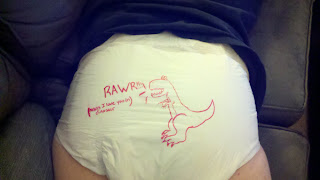